fill in the blank friday

Thank goodness it's almost the weekend! It's been a not-great week, I cried at work yesterday... I won't get into the specifics because I'd just end up going off on a rant, and if someone from work read it I'd probably get fired, so... whatever.  Halloween! Yay! 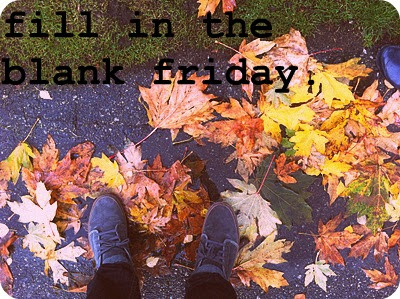 1.   When I was a kid I wanted to be      a dance teacher, ghost hunter, author, astronomer, tornado chaser, race car driver, singer, actress    when I grew up.

2.   As an adult, my dream job would be   working for myself, doing something crafty that I felt confident with      .

4. The childhood Halloween costume that I remember most was when I was    a gypsy.  I wore the shortest daisy duke shorts I had and a flowy shirt and colorful makeup.  Come to think of it, that's the only halloween costume I even remember, and I love love love halloween.  hmm.   .

5.  My favorite childhood toy was    books (I just called my mom on these next two questions because I had no idea, she said I wasn't a big doll person, and all I ever asked for were books- I loved the Babysitter's Club Little Sister books and Goosebumps) .

6.  The time I got into the biggest amount of trouble when I was a kid was when I     my mom said I never really got into trouble.  I do remember getting my name on the board in Kindergarten because my friend was talking to me, and I was so upset over it.  I hated getting in trouble.    .

7.  I get daily inspiration from    pinterest, etsy, bloggers  .
Be sure to link up to Fill in The Blank Friday on Lauren's blog, The Little Things We Do!
Posted by Noelle at 1:20 PM No comments:

Email ThisBlogThis!Share to TwitterShare to FacebookShare to Pinterest
Labels: fill in the blank friday

Just a sampling of things that make me feel good.

Posted by Noelle at 4:28 PM No comments:

Just finished a big project at work- a price book that normally takes a couple weeks but got dragged on for over two months.  so that was fun.  at least it's done.  now i'm gearing up for halloween! my favorite holiday!  we always dress up as a group in my department at work (I work at a chemical company so this year we're all dressing up as different chemicals!) so that will be for Monday.  My husband and I are going to a halloween party for a couple hours on Saturday - instead of our football game - we have to stay close to home since my dog just had surgery and we can't leave him alone for the 7-8 hours we would probably be gone for football.  we're dressing up as the Spartans Cheerleaders from SNL for our party.

I bought our costumes online, and I just have to say, costumes are way too expensive considering the poor quality with which they are made.  The skirt and pants don't even have waistbands, they have a thin band of elastic.  hmm I just thought about something- I need some Keds to finish off my costume.  A thrift store visit might be in my future.

I'm feeling like today should be Friday... this week needs to hurry up and end.
Posted by Noelle at 3:34 PM No comments:

when i was in 5th grade(ish), I remember going to the library and checking out this book: Best Loved Poems of the American People.  It has over 575 poems in it, and was originally published in 1936.  i have no idea why, but i read the whole book.  i've never been a huge poetry reader, but i kept re-checking out this book for a couple months.  i hadn't thought about the book in about 15 years, but the other day i was at barnes & noble and i saw the book and recognized it from the cover, and the memories flooded back of reading this book.  i remembered i had a favorite poem from this book, and i searched the book until i found it again-

Death is a Door
by Nancy Byrd Turner

Death is only an old door
Set in a garden wall
On gentle hinges it gives, at dusk
When the thrushes call
Along the lintel are green leaves
Beyond the light lies still;
Very willing and weary feet
Go over that sill
There is nothing to trouble any heart;
Nothing to hurt at all.
Death is only a quiet door.
In an old wall.

Now, let me remind you, I was in 5th grade.  This was also around the same time I was obsessed with ghosts and "true" ghost stories, and asking every grown-up I knew if they had ever seen ghosts (by the way, my grandma and aunt have pretty extensive ghost-seeing pasts).  So I'm not sure if that had anything to do with me being taken by this seemingly morbid poem, but if you read it a couple times, it's actually really soothing.  There's just an old door in a garden wall, and one day, when you've lived your life and you're ready to go, you can step over the sill and there's nothing troubling or hurtful beyond that wall.  It paints such a serene picture of this old door in an ivy-covered wall.

Random, I know- I just read a different poem and it made that book and poem pop into my head.
Posted by Noelle at 2:33 PM No comments:

Email ThisBlogThis!Share to TwitterShare to FacebookShare to Pinterest
Labels: about me, books

fill in the blank friday!

I'm so ready for this weekend.  I'm done with my 4 saturdays in a row of class from 9-5, and I finally get to go to a football game since i had to miss two.  my html/css class was good, i definitely felt ahead of the curve as far as the other people in my class went.  some people were just completely lost, but hey, at least they're trying to better themselves.  next thursday i'm leaving to go up to a cabin in the mountains with my husband and another couple, so hopefully that will be fun, i'm hoping the leaves are changing to orange and the weather will be brisk but not too cold.
on another note, my dog needs $4000 surgery for a torn ligament in his knee.  so that's fun.  we're going to see a specialist on tuesday to see what he says about the surgery.  the hard part is going to be trying to get my super hyper dog to stay still for 6 weeks so his leg can actually heal.  and he'll probably need rehab which is probably as expensive as the surgery.  yay.  but i love my baby and i feel like we've failed him as parents by not exercising him as much as we should have, or something.  and just so you know, CCL or ACL ligament tears in dogs are extremely common, and surgery is expensive, so i would probably get some pet insurance if i had a dog.  you always just hope nothing super expensive will ever come up, but from the people i know, there's usually something that happens in a dog's life that will warrant surgery, and having to come up with thousands of dollars at once is a lot harder than just paying the $30 a month.

anyways, on with fill in the blank friday, and don't forget to link up at the little things we do! 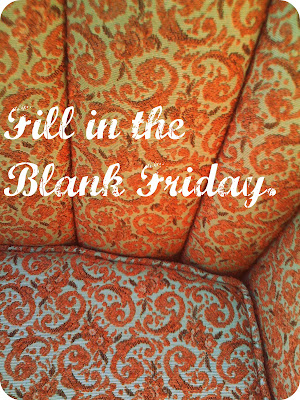 1.   Something popular that I can't stand/just don't "get" is     beyonce.  she just really bothers me for some reason and while we;re on the subject i also dislike lady gaga, rihanna, and ke$ha (it just killed me to type a dollar sign in her name, how lame) .

2.   Something unpopular that I secretly love is    high school shows.  I love gossip girl, 90210, the lying game, pretty little liars, the vampire diaries, secret circle.  i can't help it, that's just what i like to watch!

5.  Something that makes me nervous is    trying to market myself, i just don't have enough self-confidence in my abilities .

6.  Something worth fighting for is     freedom.  thanks to all the people who allow me to live my life the way i choose   .

Noelle
I am a graphic designer in Alpharetta, GA with a passion for the creative things in life! I am married and have a dog named Caesar. I run the etsy shop Priss Designs.

Art Quote of the Day!

Check out my Etsy shop!